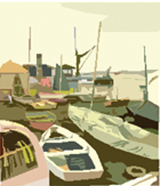 The name Chevarie is derived from "D'Étcheverry", a basque name whose literal translation means "New house". This family name is still quite common in St-Pierre et Miquelon. The coat of arms of the basque D'Étcheverry is depicted here:


Fishermen from the Basque region of Europe were fishing the Grand Banks of Newfoundland for cod and whale, prior to any permanent settlement in North America. Research has shown that "D'Étcheverry" had established seasonal residence in Newfoundland dating back to at least the 1500s. Much more research is needed to confirm the continuous presence of our ancestors in the region.


The earliest ancestral line of the Chevarie in the Maritime Provinces goes back to circa 1727, when Antoine D'tcheverry came to the colonies, and eventually settled in Prince Edward Island with Marie Pinet originally from Grand Pré. Antoine was born on October 3rd, 1707 in Bayonne, France. Most Chevarie families in New Brunswick, Prince Edward Island, the Magdellan Islands and the Islands of Saint-Pierre and Miquelon can trace their genealogy back to Antoine. It is not known if Antoine and Bernard were related.


We also know that in 1649, Bernard D'Étcheverry was granted 200 acres of land in the "Paradis Terrestre", a small village of Nova Scotia now known as Bridgetown. Several D'Étcheverrys were also living in or around Louisbourg, Nova Scotia, before 1745. Unfortunately, we have no information about the descendents of these D'Étcheverrys. More research is also required.


We also know that in the 1700s villages were often named after a family when several families with the same name were living in the area. There is a village near Minas Basin (le Bassin des mines) Nova Scotia called Cheverie. This village has been in existence since well before the 1755 Deportation. There are no Chevarie now living in that village and no information is available about its original habitants. Yet another area for research. Much research has been done about the early Acadian settlers in the Atlantic Provinces. However, since the D'Etcheverry name is not listed as an Acadian name of the pre-Deportation era, we are not included in these studies. The D'Etcheverry name only appears in these studies if it is linked to the Acadian family name being researched.